SEATTLE, Nov. 2, 2021 — PitchBook, the premier data provider for the private and public equity markets, today released All In: Women in the VC Ecosystem, its third annual report examining US venture capital (VC) investment in female-founded startups. The report, published with support from J.P. Morgan and Beyond The Billion, found COVID-19 disproportionately impacted female founders last year. Dealmaking was more sporadic for much of 2020 as companies founded solely by women experienced a 28% decline while all-male-founded companies only saw a 5% decline between March and June of that year. Valuations of early-stage female-founded companies significantly diverged from the overall market for the first time in over a decade and existing gaps at the late stage widened. Despite these headwinds, female-founded companies have already shattered the previous annual deal value record in just the first three quarters of 2021 and continue to outperform the broader market when it comes to exits, both in terms of overall exit value increases and the median time it takes to exit. Perhaps most promisingly, checkwriters have become increasingly more diverse in the post-#MeToo era, with record highs of female GPs and angel investors in the ecosystem today. Given female checkwriters are more likely to invest in female founders, this growth could lead to a long-term ripple effect on the headline numbers for years to come.

“Since launching our Women in the VC Ecosystem series in 2019, we’ve seen meaningful growth in the number of women in decision-making roles at VC firms, a positive institutional-level trend that should bode well for female founders,” said Nizar Tarhuni, Senior Director of PitchBook’s Institutional Research Group. “However, the measurable COVID-19 setbacks for female-founded companies, despite their consistent performance and resilience, illustrate why we must be diligent about pushing for gender equity within the VC ecosystem. We hope this data-backed look at the state of female-founded startup performance and funding will empower VCs and institutional investors to allocate more funds to these companies and continue placing women in checkwriting roles within their own firms.”

Following the methodology of the first two All In reports, PitchBook analyzed investment activity in US-based startups with at least one female founder. The report also includes a spotlight on female angel investing and breaks down funding activity within specific US ecosystems and sectors, including tech, pharma & biotech, healthcare, retail and fintech.

Key Takeaways Uncovered by PitchBook’s All In: Women in the VC Ecosystem Report:

About PitchBook
PitchBook is a financial data and software company that provides transparency into the capital markets to help professionals discover and execute opportunities with confidence and efficiency. PitchBook collects and analyzes detailed data on the entire venture capital, private equity, and M&A landscape—including public and private companies, investors, funds, investments, exits and people. The company’s data and analysis are available through the PitchBook Platform, industry news and in-depth reports. Founded in 2007, PitchBook has offices in Seattle, San Francisco, New York, and London and serves more than 60,000 professionals around the world. In 2016, Morningstar acquired PitchBook, which now operates as an independent subsidiary.

The Billion Dollar Fund for Women (TBDF) was launched at the World Bank meetings in Bali in October 2018: with an audacious goal of catalyzing $1 billion dollars into the hands of female founders globally; addressing the gender venture investment gap where women were receiving only 2.2% of all venture capital funding. In less than a year, TBDF mobilized a global consortium of over 80 venture funds committed to investing $1 billion dollars in women-founded companies.To continue to build on this momentum, the founders, Shelly Porges and Sarah Chen launched Beyond The Billion (BTB), to catalyze capital deployed to and with these venture funds, ensuring their continued capacity to invest- by mobilizing LP commitments, convening LPs and connecting them to GPs who invest in venture-backable companies founded by diverse women founders. Find out more on www.beyondthebillion.com; and follow Beyond The Billion on LinkedIn, Twitter and Instagram.

Shelly Porges, Co-Founder and Managing Partner at Beyond The Billion

“While 2020 was a year of many setbacks for women in the VC ecosystem with a 14% decline in dealmaking vs. a 1% increase for men, we were thrilled and not surprised to see female founders and funders persevere and pivot for a record-setting 2021. As Pitchbook reports, ‘[Over 2600] Female-founded companies raised $40.4 billion in the first three quarters of 2021…shattering the previous annual deal value record of $23.7 billion in 2019.’ Yet, we remain concerned as we see women lagging behind in the influx of late stage growth capital, resulting in women getting a smaller slice of a growing pie. We at Beyond The Billion are committed to addressing this troubling trend and to seeing that female founders receive a fair share of funding at every stage. We know that when you invest in women, you’re in good company.”

Sarah Chen, Co-Founder and Managing Partner at Beyond The Billion

“As a global consortium of over 100 venture funds and LPs pledged to invest and actively deploying over $1billion of capital to female founders, we at Beyond The Billion are encouraged to see the growing number of female check-writers leveraging their influence and capital. While this trend has been noted in the U.S., we’re similarly seeing this across the globe with 80% of our fund managers being women, BIPOC or both; and a growing number of male champions that recognize that investing in women is just good business. Savvy asset allocators know that diversity has to be one of their pillars of growth, and are using their capital transformatively.”

“The All In: Women in the VC Ecosystem Report highlights unprecedented progress and a shift to greater gender parity, but we need to look more deeply at whether venture culture is truly evolving. The challenges that remain for diverse founders and investors have not changed: they need access to network, community, expertise and mentorship. Now that more women are writing the checks, and getting into the boardroom, we need to make sure their presence counts – and it’s not just about optics.”

Feel free to share below and tag us @beyondthebillion! 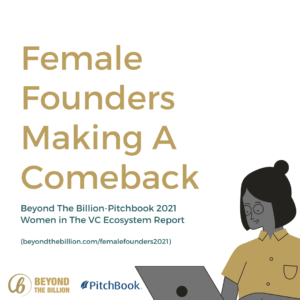 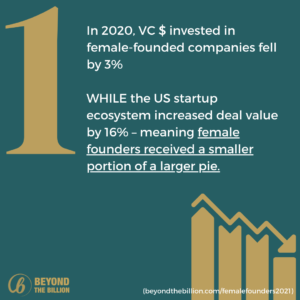 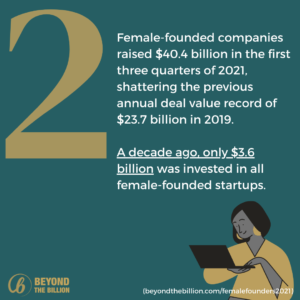 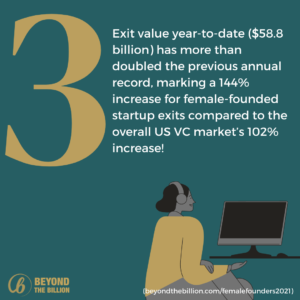 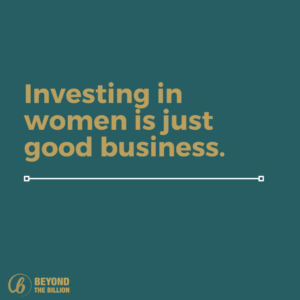 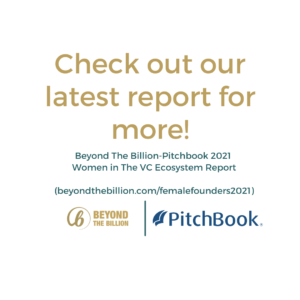 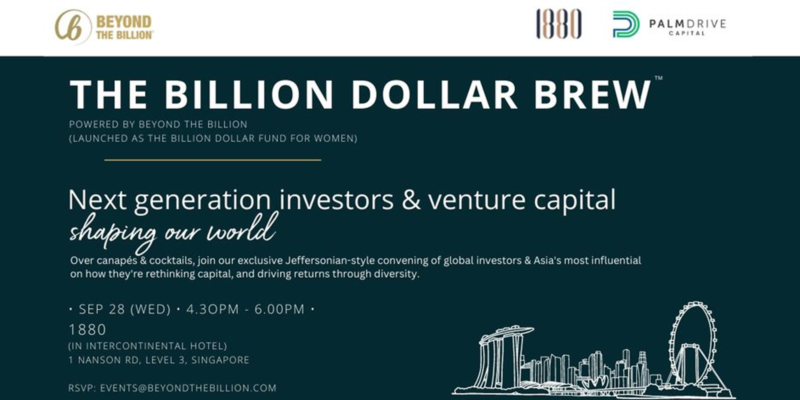 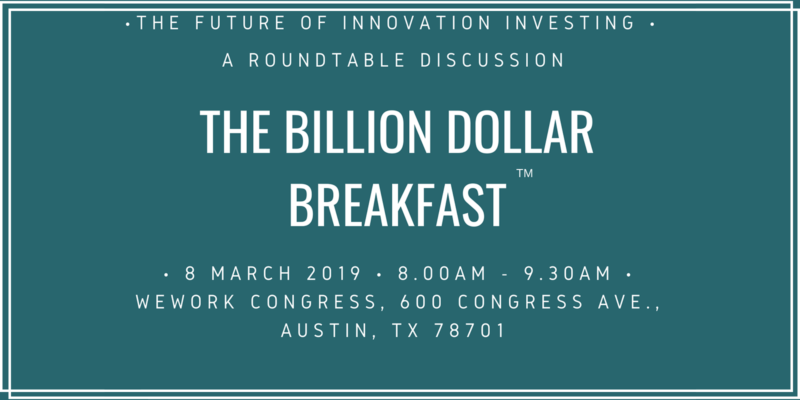 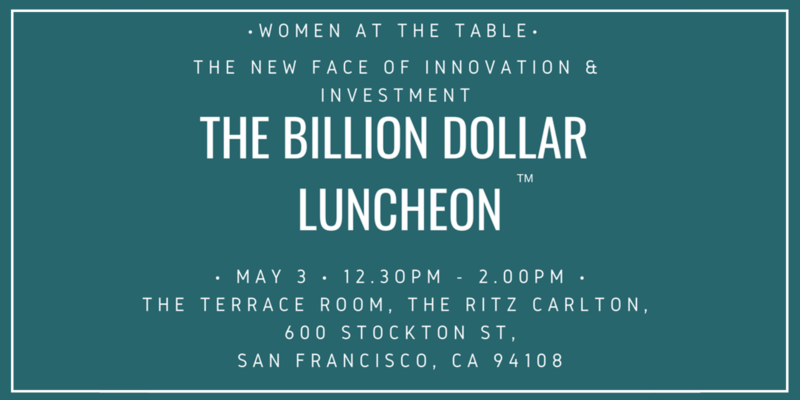 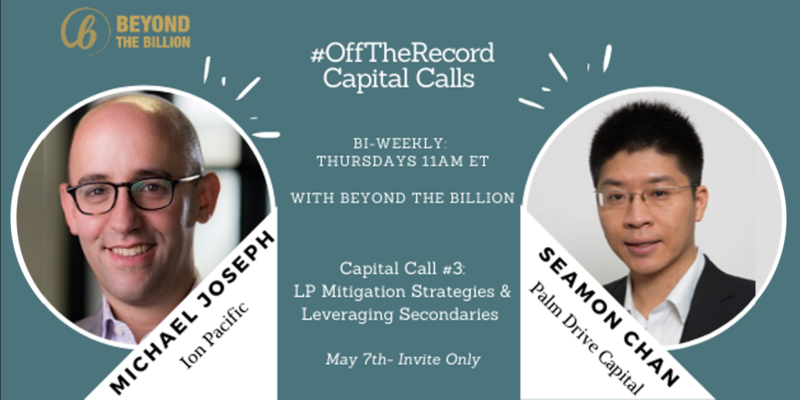 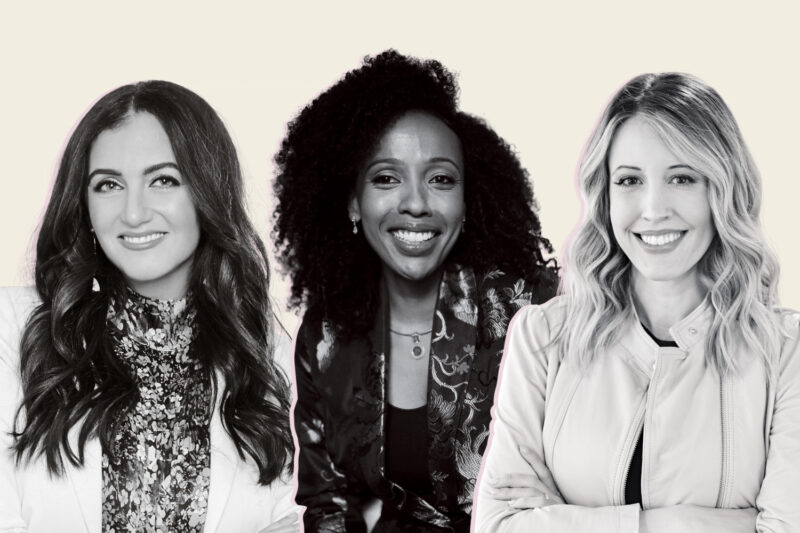